We are pleased to invite you to the Department of Languages, Literatures & Cultures’ 4th Annual International Speaker Series on Thursday, September 30, 2021, from 7-9pm EST. During this event, Dr. Michael Sharpe, scholar of Political Science and Japanese Studies at York College of the City University of New York (CUNY), will deliver a lecture titled: “Calling the Nation Home and Contesting National Membership: The Political Incorporation of Latin American Nikkeijin (Japanese Descendants) in Japan 1990-2008.”

The lecture will be delivered via Zoom and is free and open to the public. Register in advance for the Zoom lecture here: https://appstate.zoom.us/meeting/register/tJYsduyoqDgqE9TE4i9QOO0n9xFRgCFL6Kdx
After registering, you will receive a confirmation email containing information about joining the meeting.

This event is made possible thanks to a grant from the Northeast Asia Council Distinguished Speakers Bureau.

Abstract for the lecture

This attempts to explain the limited political incorporation of Latin American Nikkeijin (Japanese descendants) (LAN) in Japan 1990-2008. The 1990 Immigration Control and Refugee Recognition Act reform provides Nikkeijin a renewable visa that has enabled some 300,000 LAN to emigrate to Japan on the basis of Japanese blood descent or ethnicity. Long term marginalized minority groups such as Zainichi Koreans and Chinese are comparatively better incorporated in Japan’s political system and their demands increasingly recognized as more legitimate. I argue Japan’s changing ethnic citizenship regime, political opportunity structure, and structure of civil society combined with LAN language difficulties, newness of residence, small size, low minority status, and powerful myth of return limits their immigrant political incorporation in Japan. Additionally, the paper discusses the 2009 Kikoku Shien Jigyo (Help Return Program) to repatriate unemployed Latin American Nikkeijin to their country of origin. The lecture will present evidence that indicate a move towards a halting (de-ethnicization) (easing access for all immigrants) in Japan.

Michael Orlando Sharpe is an Associate Professor of Political Science in the Department of Behavioral Sciences at York College of the City University of New York and an Adjunct Research Scholar at Columbia University’s Weatherhead East Asian Institute. Dr. Sharpe’s areas of expertise are comparative politics and international relations and his research interests concern looking comparatively at the politics of migration, immigrant political incorporation, and political transnationalism in the Netherlands, Japan, and around the world. His first book, entitled Postcolonial Citizens and Ethnic Migration: The Netherlands and Japan in the Age of Globalization (Palgrave Macmillan, 2014), provides a cross-regional investigation of the role of citizenship and ethnicity in migration, exploring the political realities of Dutch Antilleans in the Netherlands and Latin American Nikkeijin in Japan. Some of his work has appeared in the scholarly peer reviewed journals Ethnopolitics, International Relations of the Asia- Pacific, Japanese Journal of Political Science, Policy and Society, Dialectical Anthropology, encyclopedias, and popular media. His current research concerns the politics of remigration or the paid voluntary return of migrants and their families (“pay to go schemes”) and implicit boundary making in liberal democracies. He is interested in the role of racism in political processes. Dr. Sharpe has been a Mansfield Foundation and Japan Foundation Center for Global Partnership U.S.-Japan Network for the Future Program Scholar. 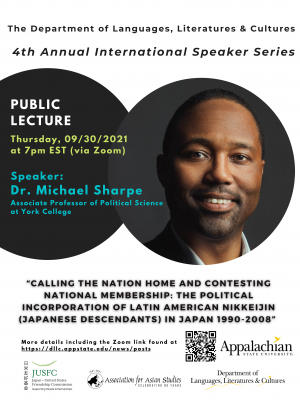 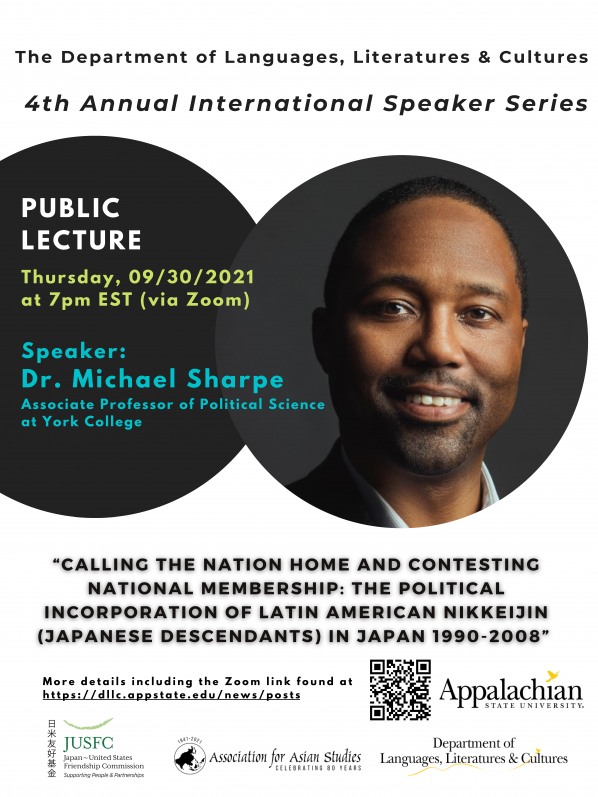