Olivia A. Posada was born and raised in Mexico in a bi-cultural home; her father is Mexican and her mother is American. Prior to moving to the U.S.A. in 2000 to attend college, she had lived in the former Czechoslovakia and Israel. She has also lived in both Segovia, Spain, and Istanbul, Turkey, on study abroad programs. An avid traveler, Posada has also visited Austria, Canada, France, Germany, Gibraltar, Italy, Luxembourg, Monaco, Morocco, Portugal, and South Africa. In addition to international travel, she enjoys participating in running events, particularly half-marathons. 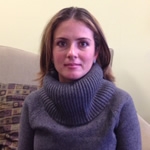