I teach all levels of Spanish and specialize in Spanish linguistics. I study a wide array of second language acquisition topics and Spanish phonetics and dialectology.

I had the opportunity to spend fall semester (2013) in Santander, Spain with a group of study abroad students and my family. I have also gone with Alternative Service Experience groups to San Diego, CA, Nicaragua, and the Dominican Republic. I am currently investigating topics related to beginning Spanish learners' lexical development as well as foreign accentedness. I co-coordinate our Spanish Education majors and our beginning and intermediate Spanish courses. 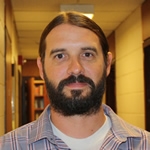